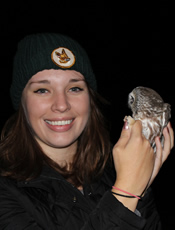 Emily is studying the potential for Grizzly Bears to contribute to songbird conservation through the protection of overlapping habitats, referred to as surrogacy or the umbrella effect. We are evaluating these potential effects in the Yellowhead region of Alberta and on a much larger scale throughout Alberta's Grizzly Bear range. Specifically, on the smaller scale we are assessing bird diversity in bear habitat by using autonomous recording units (ARUs) placed at areas of known bear use (vs. random locations) and on the larger scale by using pre-existing bird observation data for the province that falls within the known Grizzly Bear range. On this province-wide range scale, we are also comparing the capability of Grizzly Bears to act as an umbrella species against other flagship species in Alberta – Woodland Caribou and Greater Sage Grouse.