Alberta’s in situ oil sands developments do not result in major losses of forest habitat, but do dramatically increase fragmentation due to linear exploratory disturbances. Here we are study the responses to this fragmentation of boreal butterfly assemblages. First we are investigating how the assemblage (abundance and diversity) responds to different types of oil sands footprints including roads, well pads, 2D seismic lines, 3D seismic lines and control forests. Second, we are examining behavioral responses for individual species by assessing (i) how structural changes in the boreal forest, in particular the linear nature of disturbances, alter movements in the arctic fritillary butterfly, and (ii) how disturbances affect rare cranberry blue populations. Finally, we are examining how natural (wildfire) and anthropogenic (in situ footprints) disturbances interact in complex ways affecting patterns of resilience in the butterfly assemblage. Butterfly communities are widely reported as having major declines shortly after fire. However, some species typical of the boreal may have strategies to persist while anthropogenic disturbances may result in small fire breaks that provide refugia from fire and thus sources for population recovery. 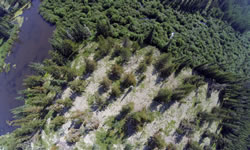