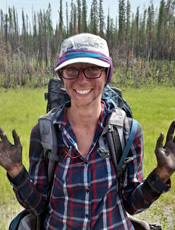 The western boreal forest is important breeding ground for many species of songbirds that winter throughout North and South America. These species are accustomed to regularly occurring wildfire in the boreal forest. However, fire is expected to increase its prevalence on the landscape with climate change and we have limited knowledge about how species in northern forests, and particularly in peatland habitat, may respond. This study is investigating how bird communities and individual species respond to burn severity across boreal habitats in northern boreal forest using two large (110,000 and 750,000 Ha), naturally caused fires that occurred in 2014 in the Northwest Territories.

Michelle is studying how bird communities respond to forest fire severity in the northern boreal forest, where fire is the most important natural disturbance structuring landscape composition and forest age structure. The northern boreal forest in the Northwest Territories closely emulates natural fire patterns as there is limited forest fire fighting capacity and no salvage logging of merchantable timber in burned forests. This study is examining two large, recent forest fires in southwest NWT using automated recording units (ARUs) to detect vocalizing bird species. Important regional information gaps on species ranges and communities is also being addressed by this project (e.g. range extensions of boreal songbirds). Research is being conducted in conjunction with the Canadian Wildlife Service and the ABMI Bioacoustic Unit. Co-supervisor is Dr. Erin Bayne.